It’s taken a while but Apple have finally added the ability to allow app developers to respond to mobile app reviews and ratings, something Google added to Google Play way back in 2013. This new addition of app responses is part of the large iOS update in 10.3.

The term ‘app developer’ is a bit of a misnomer though, as a developer could be any publisher of an app – not just the actual developer. So if your company or organisation has published apps to the Apple app store, and you’ve had the odd negative review, then you’ve probably had the frustration of not being able to respond to those reviews – at all! 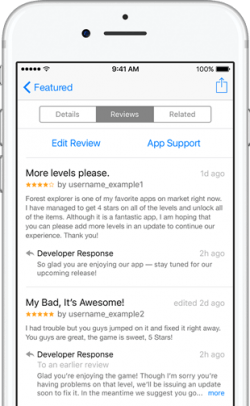 Your purpose might not have just been to explain an upcoming feature, or rectify a negative review though. No matter how much time or budget you spend on any software project it will contain bugs that need to be squished. So the seemingly simple task of gaining more information from a user to determine the source of a bug was virtually impossible before now. And who had that ultimately impacted on? That’s right, the end-user.

Now Apple may have recognised this flaw in the user experience and have now added the tools and software update to provide this functionality.

As the ‘developer’ of an app, you’ll have access to iTunes Connect where, now, you can finally respond to the feedback!

How to respond to app reviews

Ratings and reviews can be extremely important for your’ apps app store ranking so keeping your users happy will help push your app up the charts. Apple themselves have some advice on how to respond to app reviews, but here are a few top tips we’d recommend:

Our top 10 tips for responding to app reviews

If, like us, you’re an app developer, you’re now able to use SKStoreReviewController to show a standardised ‘Request Review’ dialog to request that the system prompts the user for a review.

The benefit for the end-user is that it limits the developer from requesting it more than three times per year. This is in anticipation of Apple removing the ability to show review prompts by other means completely. So if you’re not using SKStoreReviewController yet, I’d recommend getting it added before Apple remove it.

Inviting Someone to Google Analytics